Andy Jones: His cars are a vehicle for greater good | Buzz On Biz 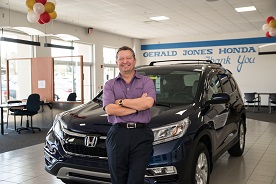 Our very own Andy Jones was named Business Person of the Month by Buzz on Biz. Thanks to the author, Neil Gordon, for an article that shines light on the Jones Family story and the heart Andy has for his community.

At age 12, Andy Jones was destined to serve and plan his life’s work in the car business.

In the 1970s, his father, Gerald Jones, owned a Volkswagen car dealership on Milledgeville Road in south Augusta.

“I’d work there after school, we’d go home for supper and my dad, mom, sister and I would come back and clean the building after dinner,” said Jones.

He learned all aspects of the business from his father and attended the University of Georgia in the early 1980s, with the understanding that he would join the family business.

At age 20, in his junior year, Gerald Jones’ partner left and Andy became a minority shareholder with his dad.

“I wanted to quit school before graduation, but Daddy wouldn’t let me,” said Andy.

Andy graduated one weekend in Athens in 1985, and the next Monday he learned about his future during a rare staff meeting led by his father.

“He told everyone I was in charge.”

Read the entire article here. Source: Business Person of the Month: His cars are a vehicle for greater good | Buzz On Biz