Gerald Jones Subaru had a howling good time providing a space for the Dog Networking Agents of Augusta to hold a very successful “Meet and Greet” dog adoption event! All of the dogs that are rescued by the Dog Networking Agents are placed with foster parents and are analyzed for their specific needs. Families or Individuals who want to adopt are required to fill out an application and schedule a home inspection to make sure they are able to care for their new pet properly. So many shelters are becoming overloaded with animals from owners who find they are unable to provide a proper home for their pets, and the Dog Networking Agents are working to eliminate their rescues from being displaced again after they become adopted. Gerald Jones Subaru had a tremendous turnout for the “Meet and Greet” event, and every pup that was on site received at least one adoption application. The Fantastic Four pups, who were rescued from the side of a road, stole everyone’s hearts and each one has found a “Fur”ever home of their own! Reid, a calm and loyal companion, is happy to have found someone to love him the rest of his days. Izzy, a spunky bully mix and her puppy, Milkyway, were adopted as well! Supporting the Dog Networking Agents is an honor and Gerald Jones Subaru is looking forward to hosting more “Meet and Greet” events soon! 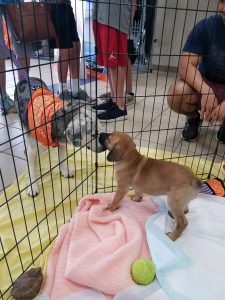